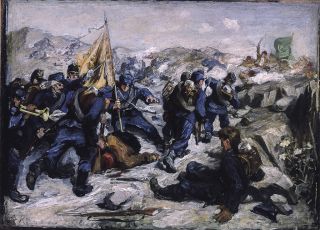 The Congress of Berlin and Austrian predominance in the Western Balkans

At the Congress of Berlin in June 1878 a considerably territorially reduced Bulgaria is confined to its northern territories principally tributary to Turkey. The great powers: Germany, Russia, France, Great Britain, Austria and Turkey grant Austria the right to occupy and administer Bosnia and Herzegovina and concede the military occupation of the Sanjak of Novibazar.

The Austrian army occupying Bosnia Herzegovina goes into battle against the Bosnian insurgents, which turns out to be a costly military campaign. In 1881 the last parts of the Croatian Military Frontier is merged with Hungary, with substantial Serb communities in all of these territories. The Austrian Government subordinates most of the Serb national rights to the Magyar-Croatian Administration. This, and the occupation of Bosnia Herzegovina, puts a strain on relations with both Turkey and Serbia.