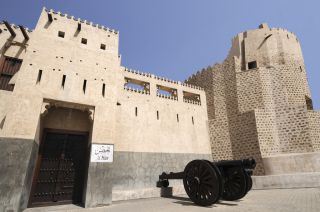 The 1820 Peace Treaty forced the Qawasim and other sheikhdoms along the Gulf to mark their pearling and fishing ships with red-and-white flags and carry documentation for inspection by the British. Regular subsequent treaties between rulers on the shores of the Gulf and the British ensured peace at sea during the economically crucial and highly profitable pearling season. In 1853 a Treaty of Maritime Peace in Perpetuity made these annual agreements permanent, with British India as mediator and enforcer. Participating sheikhdoms (emirates or states) now were termed “Trucial States”, their lands the “Trucial Coast”. This is a crucial step in British attempts to separate, and later segregate, the region from other political entities. Meanwhile, peace at sea brought stability and prosperity to the Gulf and increased the region’s contact with the outside world, with Sharjah – its rebuilt fort a symbol of continuing Qawasim status – quickly developing into a key economic hub in the region.