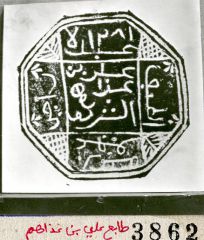 About Higher Institute for the Study of Contemporary History of Tunisia, University of Manouba, La Manouba, Tunis

This seal, dating to 1864, belonged to 'Ali ben Ghedhahem, an educated man and the son of a qadi from the Kasserine region. He was one of the biggest figures in an insurrection triggered by the issuing of a decree to double taxes in Mejba, April 1864. The revolt started in the west, but quickly spread to the whole regency, with the exception of just a few coastal towns. However, it was soon qashed, and the violent suppression the people were subjected was not forgotten until the mid-20th century. The legendary hero 'Ali ben Ghedhahem was arrested and convicted.