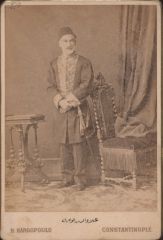 With the political developments of 19th century, interest in the East increased steadily in the western world. Everything belonging to the East was the centre of interest for western observers. As a result, close to 160 artists visited Istanbul in 19th century. Vassilaki Kargopoulo was of Greek descent. His first studio was opened in 1850 near the Russian Consulate. Between the years of 1859 and 1860, he began to attract the attention of customers from all sections of society. He focused on Ottoman clothing and street vendors in 1860.