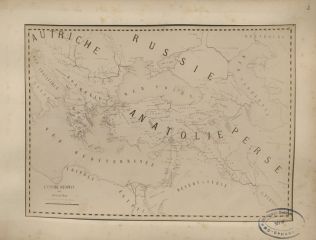 Ottoman map of the period of Sultan Abdülhamid II

One of the world's largest photo archives, Abdülhamid II's photo archives – knows as the Yildiz Albums – contain about 37 thousand pictures from that period of the Ottoman Empire. Abdülhamid II was the 34th Sultan of the Ottoman Empire and the last Sultan to exert effective autocratic control over the fracturing state. He oversaw a period of decline in the power and extent of the empire, including widespread pogroms and government massacres against the minorities of the empire (named the Hamidian massacres, after him) as well as an assassination attempt. He ruled from 31 August 1876 until he was deposed shortly after the 1908 Young Turk Revolution, on 27 April 1909.

"Ottoman map of the period of Sultan Abdülhamid II" in "Sharing History", Museum With No Frontiers, 2022. https://sharinghistory.museumwnf.org/database_item.php?id=object;AWE;tr;116;en