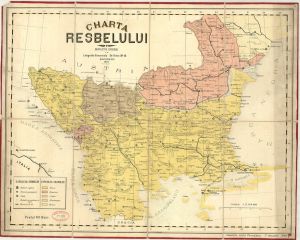 This map shows the theatre of operations during the Russian-Ottoman war of 1877–1878, which for Romania represents her independence war. In April 1877, Romania signed a secret military convention with Russia, who was on the eve of a new war with the Ottoman Empire, allowing her troops to cross the Romanian territory in order to get south of the Danube. Because in May the Ottomans bombed some Romanian ports on the Danube without a previous war declaration, the Parliament proclaimed Romania’s independence and decided the country’s entrance in the war. By the beginning of 1878, the Russo-Romanian army was victorious. At the peace Congress of Berlin (June-July 1878) Romania’s independence was recognized, but she had to cede Russia the south of Bessarabia in exchange for a part of Dobruja.