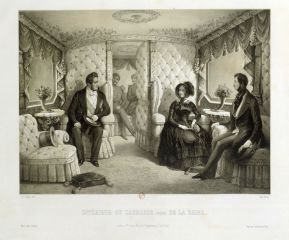 The interior of the Queen's carriage: meeting between Louis-Philippe and Queen Victoria

Keen on keeping up good relations with the United Kingdom, King Louis-Philippe of France accepted Queen Victoria's invitation in 1844. Accompanied by Guizot and his youngest son, the Duke of Montpensier, he was received lavishly by the English royal family. In 1842, Queen Victoria became the first sovereign to take the train between London and Windsor. Since then, British rail companies had begun setting up carriages especially reserved for the Royal Family. One of the key experiences offered to Louis-Philippe was the opportunity to travel by train in one of these spectacular carriages.

"The interior of the Queen's carriage: meeting between Louis-Philippe and Queen Victoria" in "Sharing History", Museum With No Frontiers, 2022. https://sharinghistory.museumwnf.org/database_item.php?id=object;AWE;fr;57;en