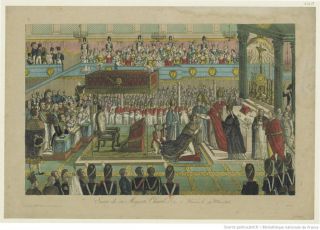 Coronation of His Majesty King Charles X, in Rheims, 29 May 1825

Charles X was Louis XVI's younger brother. During the revolution, Charles (then the Count of Artois) emigrated in search of support from other European royal courts. He disapproved of Louis XVIII's pragmatism, and following his death advocated a return to the Ancien Régime. He had himself crowned in Reims, like his ancestors, although the cost of this grandiose ceremony was the subject of great controversy.

"Coronation of His Majesty King Charles X, in Rheims, 29 May 1825" in "Sharing History", Museum With No Frontiers, 2022. https://sharinghistory.museumwnf.org/database_item.php?id=object;AWE;fr;118;en