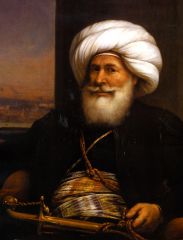 Muhammad 'Ali Pasha, founder of Modern Egypt and Wali of Egypt in 1805. He was the head of the Alawiyya Dynasty that ruled Egypt from 1805 to 1952, and founder of modern Egypt. He came to Egypt in 1799 as part of a military unit to fight with the Turks – and the help of the British – to drive the French out of Egypt. However, the Turkish forces were defeated in 1799 in the Battle of Abu Qir.

Migrations | Migrations Within The Ottoman Empire | Powerbrokers Migrations | The Life Of European Immigrant Communities: Egypt And Tunisia | The Political And Juridical Framework Migrations | North–south Movements | The Cross-mediterranean Movements Of The Privileged Few Music, Literature, Dance And Fashion | Literature | Al-nahdha And Tanzimat, The 19th-century Winds Of Change