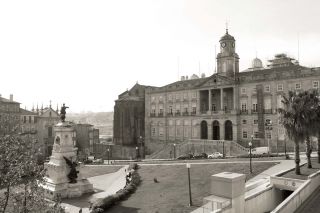 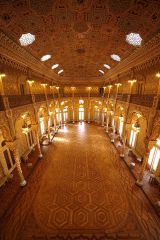 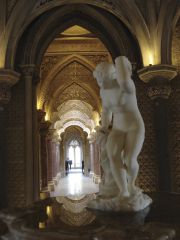 The Palace of Porto Trade Association Headquarters, the Arabian Room
1842

1815–1850: The emerging liberal state without the colony of Brazil

With the Liberal Revolution of 1820 Portugal became a liberal and constitutional monarchy (Constitution 1822). King João VI returned from Rio de Janeiro (Brazil) where the Court had been based since the Napoleonic invasions (1807). In 1823 João’s son Prince Pedro proclaimed himself Emperor of Brazil, which meant independence for the colony. Pedro inherited the throne of Portugal on his father’s death but stood aside for his own daughter, the future Queen Maria II. Meanwhile, Prince Miguel, Pedro's brother, aimed for a return to absolutism (abolition of parliament and the Constitutional Charter of 1826). Civil war and political exile – to England and France – were the main highlights for the period till 1834, the year of the military liberal victory. The Setembrismo government introduced important liberal reforms and social changes, such as grammar schools, the Porto and Lisbon polytechnic schools and many political newspapers and popular magazines. Nevertheless, the danger of another civil war was still present.