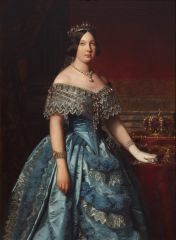 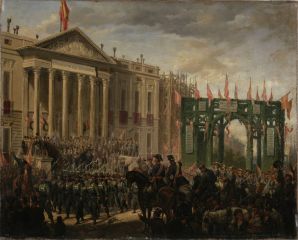 Military Parade in front of the Congress of Deputies to Celebrate the Triumph of La Gloriosa [the Glorious Revolution of 1868]
c.1868–c.1872
National Museum of Romanticism, Madrid, Spain

From 1798 to 1939 Spain abandoned the ancien regime: political factions, sometimes led by the military, fought for power in a deteriorating economic situation. In the meantime, the country suffered three civil dynastic wars and, looking for lost prestige, was involved in international conflicts in North Africa, America and Asia.

After a successful coup (pronunciamiento), the politicians in government tried to implement their reforms within the Constitution and between 1812 and 1876 five constitutions were proclaimed. The Bourbon Royal family’s prestige had suffered so they were removed from the throne, but after a failed king and a republic they were reinstated.

Most politicians belonged to one of two parties, either liberal or conservative. A façade of democracy was established and the country could attempt to develop. Moving into the 20th century new political forces – trade unions, nationalism, republicans – appeared on the political scene and upset the system. The Restoration crisis led to a new civil war in 1936.