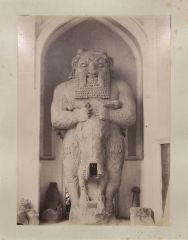 Add to My Collection

The Statue of The God Bes

A large statue of dwarf God Bes is located in the Aessos Works Hall. Bes was an ancient Egyptian dwarf god. He was a complex being who was both a deity and a demonic fighter. He was a god of war, yet he was also a patron of childbirth and the home, and was associated with sexuality, humour, music and dancing. Bes also became popular with the Phoenicians and in Cyprus.

Citation of this web page:

"The Statue of The God Bes" in "Sharing History", Museum With No Frontiers, 2022. https://sharinghistory.museumwnf.org/database_item.php?id=object;AWE;tr;190;en

Daniel de la Vega is a copy editor based in Portland, Oregon. He obtained his bachelor’s degree in linguistics from the University of California at Santa Cruz in 2014 and has since done editing and localization work on everything from college applications to magazines to video game dialogue.

Timeline for this item