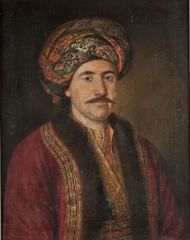 Add to My Collection

About The National Museum, Belgrade

Milos Obrenović (1783-1860) was Prince of Serbia from 1815 to 1839, and again from 1858 to 1860. He participated in the First Serbian Uprising, led Serbs in the Second Serbian Uprising, and founded the dynasty of Obrenović. Under his rule, Serbia became an autonomous duchy within the Ottoman Empire. He is credited with starting the process of re-establishing Serbian statehood, as well as shaping the domestic and foreign policies of the modern Serbian state. Prince Milos ruled autocratically, permanently refusing to share power. During his rule, he was the richest man in Serbia and among the richest in the Balkans. In the portrait that was painted by Pavel Djurkovitch in Kragujevac, prince Milos is dressed in Oriental costume and has on the top of the head a turban. It is a typically Oriental piece of costume and this was of significance for the attitude and dignity of the Serbian sovereign at the beginning 19th century, who was by all means respecting an Ottoman empire and his Sultan.

Citation of this web page:

Daniel de la Vega is a copy editor based in Portland, Oregon. He obtained his bachelor’s degree in linguistics from the University of California at Santa Cruz in 2014 and has since done editing and localization work on everything from college applications to magazines to video game dialogue.

Timeline for this item