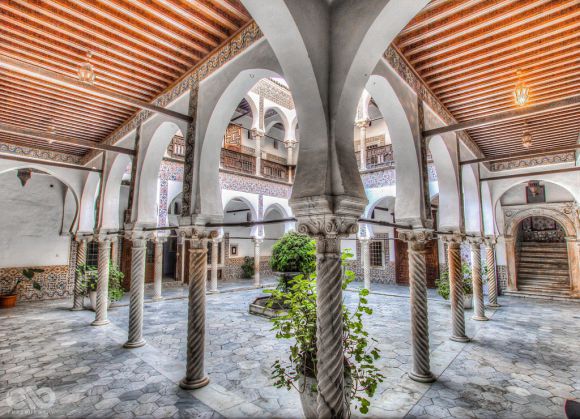 Inaugurated in 1961, the National Museum of Popular Arts and Traditions (NMPAT) is located in the lower casbah neighborhood, also known as Souk el Djemaa, where a poultry market used to take place on Fridays. The museum’s main goal is to promote the Algerian, traditional and rural heritage. Its inception dates back to the early 20th century, with the aim of boosting manual know-how and craftmanship while safeguarding local traditions.

The museum was first set in a palace built in 1570 by Ramdane Pacha. By the end of the 18th century, it went to Hassan Khaznadji, treasurer to Dey Mohamed Ben Othman, who gave it to his daughter Khedaoudj. Legend has it that the young princess had lost her sight, struck by her own beauty while admiring her reflection in a mirror. The palace was then inhabited by Jacob Cohen Bacri, a rich wheat trader. After French colonisation in 1830, the French government turned the building into the first city hall of Algiers. In 1860, part of the palace was transformed to welcome Empress Eugenia de Montijo. During her visit, Aziza Bacri, Jacob Cohen Bacri’s granddaughter was her interpreter. In 1987, a decree officially turned Dar Khedaoudj El Amia into the NMPAT.

The collection has been made possible thanks to several purchases and donations. It consists of items made for domestic use, some of which were made for competitions for the best artisan of France as well as products by famous Algeria craftsmen. Visitors can admire copper flasks, silver chests, colourful fabrics displaying geometric patterns from the Boussaada area, rugs from Chechar, ceramics from Taher and the Aures, knotted rugs weavings from the Babar area, jewels, traditional costumes and furniture from the city of Algiers. The collection also includes musical instruments, home furnishing fabrics woven with silk threads from the M'zab, costumes and embroideries, pottery and tools made by the Targuis, by the Kabyles or from the Aures, as well as silver rings from Timimoun and Tamanrasset, and fibulas from Setif and El Bayadh.

An exhibition room is dedicated to mirrors. Among these delicately ornate objects, one is suspected to have led to princess Khedaoudj’s blindness.

Beside the ethnographic collection, the Museum keeps a photographic fund with over 20,000 items, including ancient photos, Ektachromes, diapositives and black and white pictures.