In the early 1700s, the (Al-Qasimi) Qawasim confederation migrates to the coast of the Arab Gulf from the Persian littoral. Here, they establish their main base in Julfar (later Ras al-Khaimah), soon extending their sway all along the lower Gulf, across areas of the east coast and towns on the Persian littoral.

In 1765 Imam Muhammad bin Saud establishes the First Saudi State in Arabia, starting with the Najd region, and making its capital the city of Dir‘iyya.

During the reign of Hammuda Pasha Bey, known as the “Founder” of modern Tunisia, the Regency of Tunis enjoys a thriving economy and an overall sense of security.

Between around 1790 and the early 1800s, threatened by increasing British inroads into traditional Gulf economies and politics, and supported by the Persians and Omanis, the Qawasim attack British vessels to defend their economic empire in the Lower Gulf. 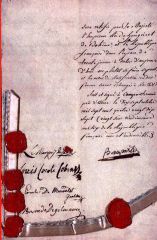 Most parts of Arabia become part of the new Saudi State. In 1803, The two holy cities of Mecca (Makkah) and Medina (Madinah), along with the rest of the Hijaz region, join the Saudi State.

The third Imam, Saud ibn ‘Abd al-‘Aziz, faces a hostile reaction from the Ottoman Empire through its powerful viceroy in Egypt Muhammad ‘Ali Pasha. After ‘Abd al-‘Aziz’s death in 1814, his son, Abdallah, battles with the Egyptian army in many regions of the state. Finally Dir‘iyya is surrendered, and Imam Abdallah is then taken to Turkey, where he is executed.

Sheikh Sultan bin Saqr succeeds his father as leader of the Qawasim. He expands the Qawasim Empire to the east to encompass the areas now known as Khor Fakkan and Kalba. He delegates the administration of key strongholds to his brothers and later to his sons. His half-brother Salih bin Saqr rules Sharjah from 1803 to 1838, followed by his son Saqr bin Sultan (until 1846), and then his son Abdallah bin Sultan (until 1855).