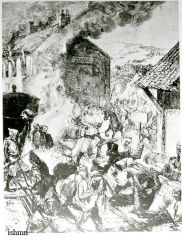 Resistance to the occupation at Oued Zarga

About Higher Institute for the Study of Contemporary History of Tunisia, University of Manouba, La Manouba, Tunis

This photograph shows Tunisians attacking the train station at Oued Zarga. The Tunisian resistance caused the French troops many problems as they advanced towards Tunis, where they hoped to force the bey to accept the French protectorate. The attack at the Oued Zarga station, a few hundred kilometres to the west of Tunis, is an example of this. The station itself, which was built by the French, became a symbol through which Tunisians attacked French interests.

Bechir Yazidi "Resistance to the occupation at Oued Zarga " in "Sharing History", Museum With No Frontiers, 2022. https://sharinghistory.museumwnf.org/database_item.php?id=object;awe;tn;80;en