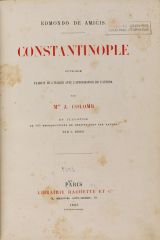 With the political developments of 19th century, interest in the East increased steadily in the western world. Everything belonging to the East was the centre of interest for western observers. Travelling in the 19th century became easier and more reliable due to the advent of steamships and trains. Westerners travelled to the East not only for touristic purposes, but also for scientific research, history, archaeology or for religious reasons. Western travellers told of their experiences and what they saw in eastern countries in their travel books and they even offer advice about the journey. Istanbul, where East and West meet, has been the subject of many a traveller's book.

"Constantinople" in "Sharing History", Museum With No Frontiers, 2022. https://sharinghistory.museumwnf.org/database_item.php?id=object;AWE;tr;102;en;N

Travelling | Tourism | Overview Music, Literature, Dance And Fashion | Literature | Orientalism In The West And In The East