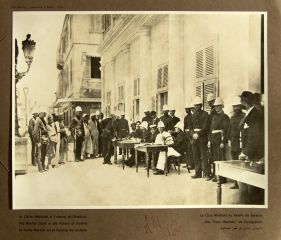 The Court Martial at the Palace of Justice

The author of this picture, Luigi Fiorillo, was an Italian photographer who migrated to Alexandria (Egypt) around 1870 and opened a successful photography shop. In 1877, he participated as photographer in an expedition to Shewa region (Ethiopia), organised by the Italian Geographical Society, and ten years later in an Italian military expedition for the colonial conquest of Eritrea.
In 1882, Fiorillo was one of the few Europeans who remained in Alexandria after the anti-foreign rioting and documented the consequences of the British bombardment on Alexandria of July 11th. He collected 50 pictures of the city in ruins in an album titled “Souvenir d'Alexandrie: Ruines, 1882”.
On the back of some photos that he took in the 1880s, Fiorillo defines himself as “le photographe de Son Altesse le Prince Mohammed Toussoun Pasha” (the photographer of his Majesty Prince Mohammed Toussoun Pasha). Luigi Fiorillo died in 1898.

Giulia Barrera "The Court Martial at the Palace of Justice" in "Sharing History", Museum With No Frontiers, 2022. https://sharinghistory.museumwnf.org/database_item.php?id=object;AWE;it;93;en;N